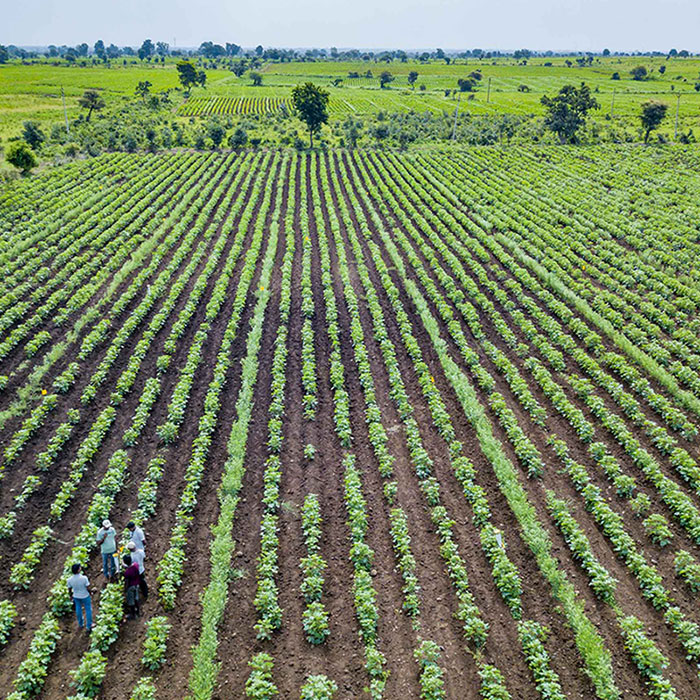 This is the first in a new series of guest blogs on the OCA platform, in which we give the floor to important voices and opinions that provide interesting and insightful perspectives on current topics relevant to OCA’s field of work.

Sarah Compson, Associate Director, Standards Innovation at Soil Association explores the world of regenerative agriculture and its kinship with organic agriculture, in an article that first appeared in The Ecologist under a Creative Commons license.

There’s a buzz around regenerative agriculture – but does it live up to the hype?

There’s a buzz around regenerative agriculture. The concept is capturing the imagination of farmers, policy makers and, increasingly, the public.

While there’s no single definition for regenerative, at the very least, it includes approaches that recognise the importance of soil health.

This is good news, because the climate and nature crises we face require us to take urgent action and make broad-scale changes to the way we farm and care for the natural world.

But if we’re to put our faith in regenerative agriculture as the solution, we need to be sure that it really lives up to the hype, drives change in agricultural practices and has meaningful impact. I believe that the best way to ensure this is by putting organic at its core.

There’s a common misconception that the term ‘organic’ is just about restrictive rules, standards and certification. Organic is much more than this – it’s a whole movement, rooted in the principles of health, ecology, fairness and care.

Thanks to the efforts of the umbrella organisation IFOAM Organics International, the organic movement collectively reached a common definition for organic agriculture, and it’s a way of farming that most proponents of regenerative agriculture would heartily support.

They defined it as “a production system that sustains the health of soils, ecosystems, and people. It relies on ecological processes, biodiversity and cycles adapted to local conditions, rather than the use of inputs with adverse effects.

“Organic Agriculture combines tradition, innovation, and science to benefit the shared environment and promote fair relationships and good quality of life for all involved.”

Put simply, organic and regenerative have the same North star, and I believe that their mutually agreeable visions can best be achieved through recognising their synergies and finding smart ways to complement and collaborate with one another.

In a sense, regenerative is like the new kid on the block and organic is its older sibling. This brings many opportunities for regenerative to recognise and learn from what organic has already achieved, avoid replication and instead focus on the opportunity to bring new innovations.

In decades past, the organic movement brought clarity by developing some basic rules for what it means to farm organically. These were later formalised into standards and today, in most parts of the world, are enshrined in legislation.

This was, and still remains, a major success for the organic movement. Whilst they’re not perfect, and don’t fully address every principle of organic, standards and regulation take us a long way in the right direction.

They mark out some important red lines and ensure that some of the foundational tenets of organic are consistently applied across all food and farming systems around the world.

Fundamentally, organic regulation worldwide is underpinned by the idea that you must work with the systems and cycles of nature, and you can’t take out more than you put in. It’s regenerative, some might say!

This means that businesses, consumers – and to an increasing extent governments and policy makers – have a way to support environmentally friendly and socially progressive systems of agriculture, with copper-bottomed legal safeguards underpinning them.

It’s clever, because creating a market mechanism for organic allows better practices to be supported even within our current broken economic system that otherwise fails to properly value people and planet.

You could call organic a shining example of an ‘oven-ready’ approach that expedites many of the increasingly urgent environmental and social changes that are needed to address the climate and ecological crisis. In this respect, standards and certification are a stand-out tool to achieve change.

Many have already realised this. The EU Commission has called for 25 percent of all farmland to be certified organic by 2030 as part of the European Green Deal, and Germany has just officially recognised organic as its model for sustainable agriculture.

But regulation isn’t the only tool in the box and doesn’t cover everything that the organic movement aspires to. It’s a floor, not a ceiling.

Many organic farmers and food businesses know this and are going well above and beyond the official ‘rules’ and have been innovating and blazing a trail for years, with organic principles as their guiding light.

The majority are in it because they have faith in its efficacy as a production system and the proof is right in front of their eyes and felt by them and their communities.

Increasingly, those organic farmers, food and fashion businesses going above and beyond organic have started to describe what they’re doing as regenerative, which makes sense, because the term implies something ‘more than’ and helps to convey a sense of a proactive, progressive and engaged action. But fundamentally, they’re still organic too.

Indeed, whilst organic enjoys legal safeguards that prevent the term being greenwashed, being a regulated term creates challenges for both newcomers and old hands.

Farmers starting out with organic practices, but who aren’t ready to go the whole hog, can feel excluded by the term ‘organic’.

Conversely, farmers going above and beyond organic regulation feel that the term organic doesn’t do enough to convey what they’re doing and the progress towards the principles that they’ve made. Somewhat counter-intuitively, regenerative appeals to both ends of the spectrum.

This is good news, we need a broad church, and we won’t achieve the changes we need to see by making the perfect the enemy of the good.

But we also need to make sure that regenerative drives real and meaningful change, and that it isn’t hijacked by those seeking to greenwash. So it must be underpinned by a clear vision and direction of travel if it’s to have the impact it seeks. Recognising organic farmers as regenerative is a good place to start.

Likewise, organic can learn a lot from regenerative too. Whilst the market-focus of organic has had a clear benefit and impact – it’s now worth over 120 billion euros, with 75 million hectares of land grown across 190 countries worldwide,  progress with driving continuous improvement and influencing the rest of agriculture has been slow.

The bureaucracy of legislation has somewhat stalled the incremental progress towards greater fulfilment of organic principles. This is where the innovations of the regenerative agriculture movement can provide organic with a rocket boost.

The focus on metrics and monitoring as tools to help improve and optimise everything from carbon storage in soils to biodiversity on farmland offers the opportunity for organic farmers to not only measure the impact of what they do, but improve it still further.

There’s a lot to be gained from recognising the shared values and trajectories of organic and regenerative. Being truly regenerative means being organic, but likewise being truly organic means being regenerative too. They’re interlinked and are stronger and more meaningful together.

Many forward-thinking companies and organisations have already come to this conclusion themselves. Many of the leading advocates for regenerative agriculture in the UK also support organic.

Regenerative and organic must work hand in hand to achieve the changes we need to see in the world, and effectively address the crises of our times. Instead of reinventing the wheel, we must stand on the shoulders of giants.

We use cookies on our website to give you the most relevant experience by remembering your preferences and repeat visits. By clicking “Accept”, you consent to the use of ALL the cookies.
Cookie SettingsAccept
Manage consent

This website uses cookies to improve your experience while you navigate through the website. Out of these, the cookies that are categorized as necessary are stored on your browser as they are essential for the working of basic functionalities of the website. We also use third-party cookies that help us analyze and understand how you use this website. These cookies will be stored in your browser only with your consent. You also have the option to opt-out of these cookies. But opting out of some of these cookies may affect your browsing experience.
Necessary Always Enabled
Necessary cookies are absolutely essential for the website to function properly. These cookies ensure basic functionalities and security features of the website, anonymously.
Functional
Functional cookies help to perform certain functionalities like sharing the content of the website on social media platforms, collect feedbacks, and other third-party features.
Performance
Performance cookies are used to understand and analyze the key performance indexes of the website which helps in delivering a better user experience for the visitors.
Analytics
Analytical cookies are used to understand how visitors interact with the website. These cookies help provide information on metrics the number of visitors, bounce rate, traffic source, etc.
Advertisement
Advertisement cookies are used to provide visitors with relevant ads and marketing campaigns. These cookies track visitors across websites and collect information to provide customized ads.
Others
Other uncategorized cookies are those that are being analyzed and have not been classified into a category as yet.
SAVE & ACCEPT
Powered by